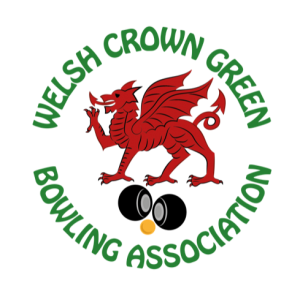 Welcome, This is the home of Crown Green Bowling in Wales

Thanks to Mr David Matthias for this report:

North Midlands Senior Men’s Team v the Wales Senior Men’s Team, at the Atherstone Conservative Club (near Coventry) – Sunday 3rd July 2022.
It was a long day for the Immediate Past President, as, after boarding the brand new 56 seater Eifions Coach, driven by Wil, at 8.00am, at Tesco Bangor, we eventually arrived at the rather grand looking Atherstone Conservative Club at 12.15pm.
On first appearance the green looked basically “small and rough”. So with light rain falling, conditions looked favourable for a good away performance by the Welsh lads.
There was one change to the printed Welsh Team, as with Keith Bailey ringing in sick this morning, ex Welsh Junior Champion, Jordan Riley was drafted into the team for his long overdue debut.
Sadly, the rest is History, as they say, as what appeared to be an easy green to bowl, became in fact, a bowling nightmare for some of the lads. Some of the falling and round peg marks beggared belief. And that, coupled with playing against some top class bowlers, was the downfall for a number of the Welsh players.
There were good wins for Paul Bradley (21/18) and proudly for myself, three Gwynedd bowlers – Geraint Booth (21/14) – Mike Pritchard (21/15) and John Short (21/19).
The overall score being 8/4 to the North Midlands and plus 57 on the overall aggregate (234/177)
But to compound the Welsh Teams disappointment, the home team, playing at the Gresford Colliery Bowling Club, fared little better, as they lost the games 5/7, but won the overall aggregate by 10 points (219/209).
Again good wins for Andrew Hughes (21/15) – Paul Hallett (21/10) – Steve Vernon (21/10) – Robin Bennett (21/18) and Simon Tyler (21/9).
So overall, a plus 47 overall aggregate win to North Midlands, who it must be said, were worthy winners on the day.
Steve Parry was given the overall Man of the Match, with North Midlands nominating Mike Pritchard as the Welsh Man of the Match. Well done Mike.
My thanks of course go to all twelve Welsh players playing, on what was an extremely difficult Bowling Green at the Atherstone Conservative Club.
My thanks also go to, D P. Williams, CEO – Trevor Clarke – Aileen Coleman and the ever young, Ian Lawley who assisted me greatly by marking two cards each on the day.
So after a very enjoyable Al Fresco hot and cold buffet, we were back on the Coach at 6.00pm for the 3/4 hour trip back to Tesco in Bangor.
A long day, as I said, for the Immediate Past President, with sadly no Semi Final to look forward to next month.
My personal thanks go out to Team Manager Joey Williams for the work he has put in again this year. Joey has his critics, but come on, without him again standing to be the Welsh Team Manager, there wouldn’t have been a Welsh Men’s Team “to support” in 2022.
The home team at Gresford Colliery: 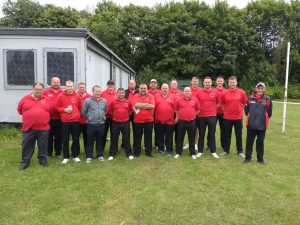 Some photos from Atherstone: 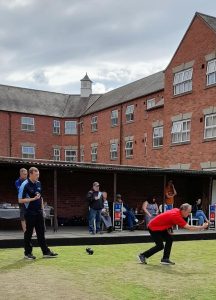 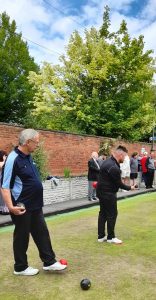 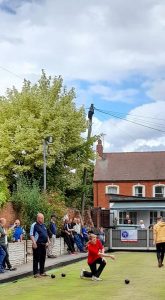 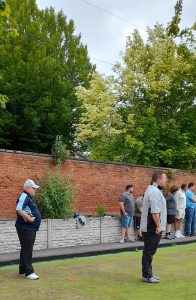 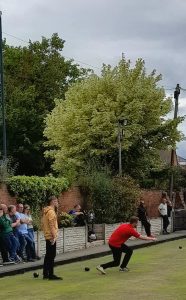 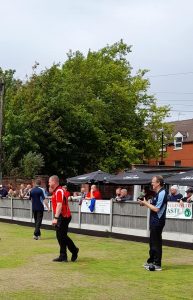 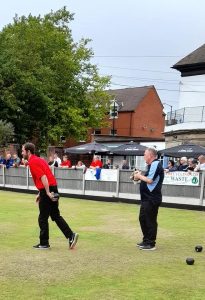 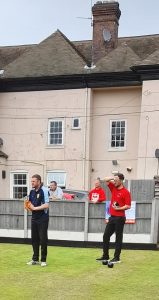 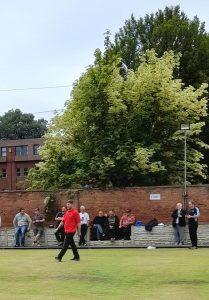 On Saturday 12 November,  the Welsh Ladies held a social ‘get together’  to celebrate their semi final achievement in the BCGBA Ladies Championship